In March, Naoto took me to The Darling for Sunday night birthday cocktails. (I’m very behind on blogging!) It came highly recommended for the drinks and the experience. We had a fabulous time.

There’s very much a speakeasy vibe here. When you go in, it looks like you’re in a weird flower shop, until the host breaks open the wall so you can enter the bar area. There are cozy leather couches and lounge-seating, and that night, there was a fire crackling in the fireplace. 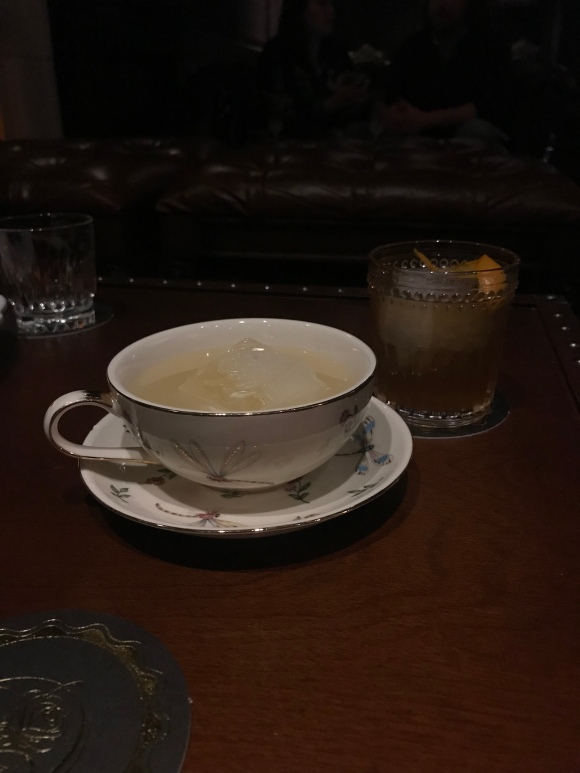 We started with a Buds of May (me) and a Paddington’s Marmalade Negroni (Naoto.) Both were really delicious, and mine was served at the table from a teapot and the presentation was everything.

The next round, I got the Mary Poppins, which had strawberry-flavored boba bubbles in it that popped when you bit into them. It was a fun drink, a little on the sweeter side. Naoto got the Curious George because I was curious (for lack of a better word) about it with the chocolate and banana and whiskey, and we both really liked it. 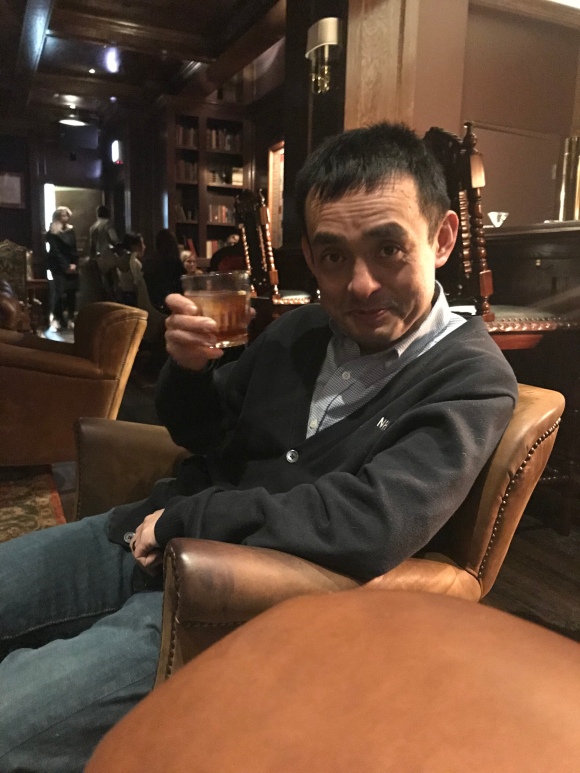 Naoto was in an especially goofy mood and made me laugh the whole night. The video is a little hard to hear, but he’s channeling Bob Harris in Lost in Translation.

Our last round was something I can’t remember and a Secret Garden (the one with the pretty flower on top.) All of the cocktails were well-crafted and interesting. We did get a few small bites but nothing was super memorable or mind-blowing. The drinks and special touches around the place make The Darling and must-return for us, probably for before or after dinner drinks. 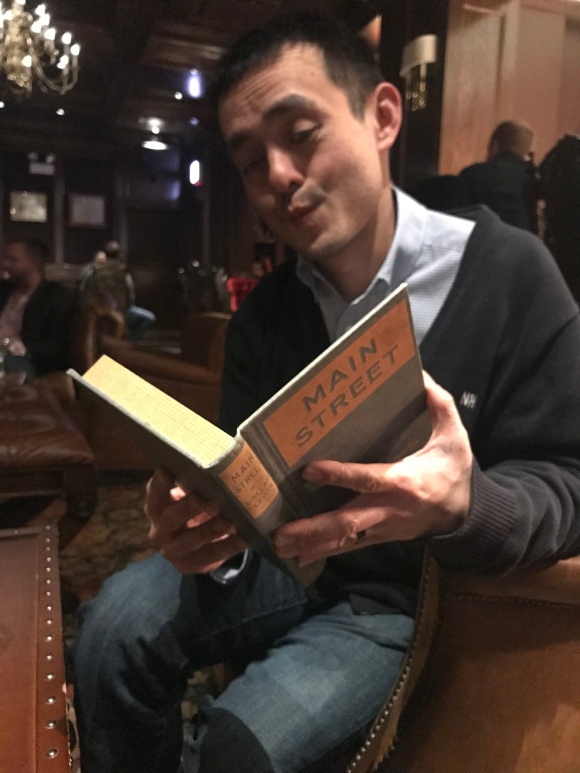 The check is presented in an old book with two tiny glasses of Last Words. 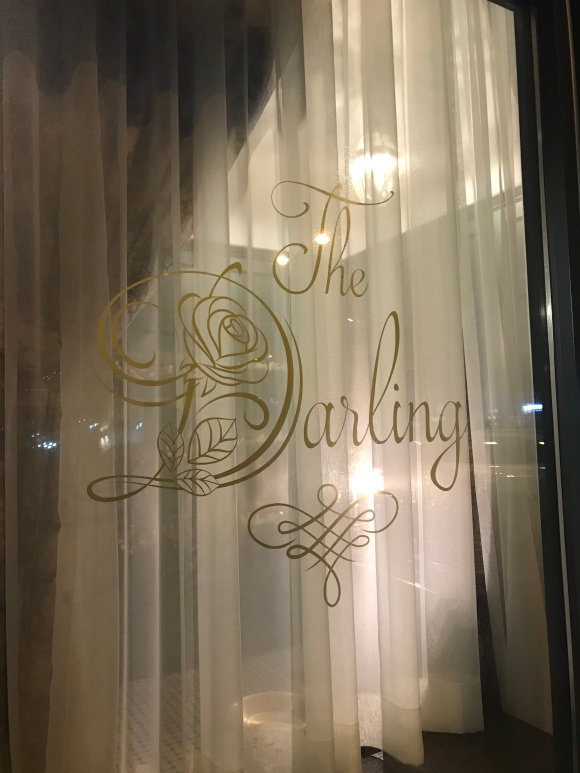 We’re planning on visiting the West Loop this weekend for our anniversary, so maybe we’ll pop in again before dinner… 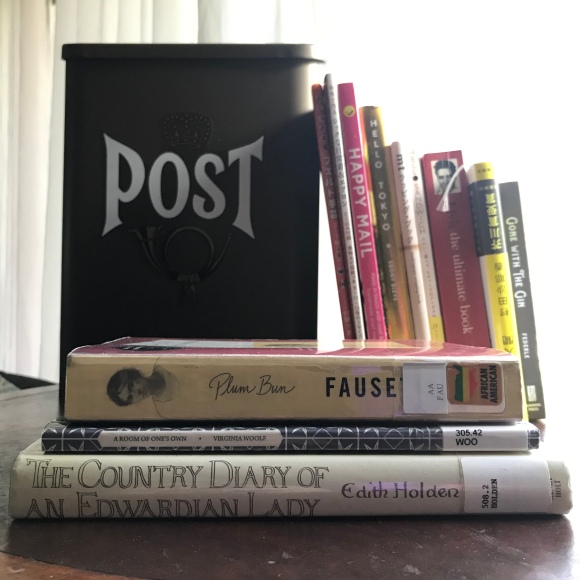 My April book stack looks so puny! My reading has definitely slowed down now that spring is (supposedly) here.

The Country Diary of an Edwardian Lady by Edith Holden

I feel like I need to own this book and read it slowly throughout the year. This book is just what it says, the 1906 diary of a woman from the country. It’s been on my list for awhile, and I’m glad I read it in the spring, but I would love to revisit it as she illustrates each season and has thoughts, poems, and sayings to complement each season. Holden’s illustrations are just beautiful. Everything is done by hand, including the words and it really encourages you to slow down and appreciate nature. I am going to be on the lookout for a copy of my own.

A Room of One’s Own by Virginia Woolf

Can you believe I haven’t read this? I loved it, though it felt like it took me forever to make it through. Woolf refutes the assumption that women aren’t good writers, explaining that unless they have the privilege of money, education, and a place to write, they will never be writers. Most women were too busy raising their children and taking care of the household and they didn’t have time to make observations about the world, let alone write them down. Women at that time were considered property, so even if they had the money, they were left at the mercy of the men to use the money for education or to advance their writing.

This was our book club read for the month. It’s very similar to Passing by Nella Larson, which our group read back in 2002, so no one really remembered enough to do a good comparison. In general, it was a really good story about a woman who is able to pass and the choices she makes to get by as white in the world. But as a group, we were disappointed in the ending and sort of the lack of strength in the main character. Some of her choices were appalling, but they made for a good “what would you do?” discussion in book club.

I thought I’d share a few more pictures from Hamilton earlier this month. There are a few great murals in Hamilton that celebrate the history and the current state of the town. The top one is new since we were there last time. I love how it is a patchwork quilt of famous people and events that bring people to Hamilton, including the Steam & Gas Engine Show, which we used to attend with my grandparents over the summer.

It was a really beautiful day for walking around town. Since it’s been a very wintry spring in Chicagoland, I really appreciated shedding my coat and walking around in the sunshine for the afternoon.

This mural of the Hamilton Train Depot is located on the wall of the Missouri Quilt Company‘s flagship store. The actual depot is gone now, but it was built in 1859 for the Hannibal and St. Joseph railroads.

And this quilt one, obviously an ode to the Missouri Quilt Company that basically put Hamilton back on the map.

We didn’t spend a lot of time in the quilting stores since I sadly have no need for more fabric in my closet.

We did pop into the Levi Garrison & Sons Brewery for a beer (cider in my case.) It was a great little spot and Naoto was really happy with all of the offerings in his beer flight.

It feels weird that this may have been my last visit to Hamilton…unless my mom and I take up quilting and have another excuse for a visit…you never know!

Returning to the JC Penney Museum

When you’re back in Hamilton, you cannot miss another opportunity to see the J.C. Penney Museum! My dad and I took Naoto and showed him around. We felt like after our visit four years ago, we were qualified to be J.C. Penney Museum docents.

Of course I pointed out all of the old typewriters… 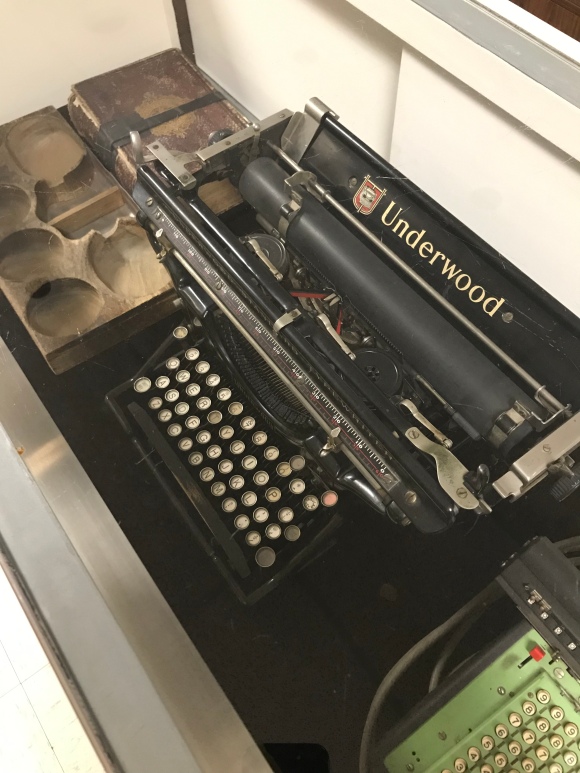 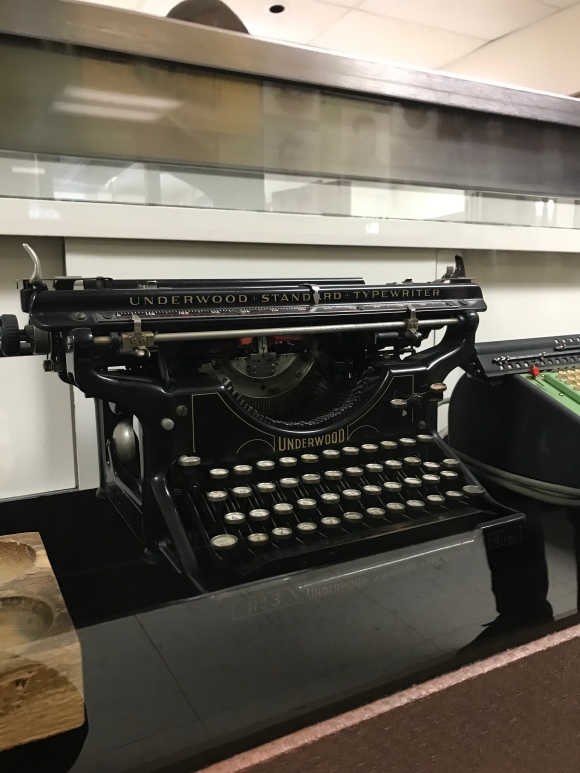 I tried to notice and photograph new things this time… 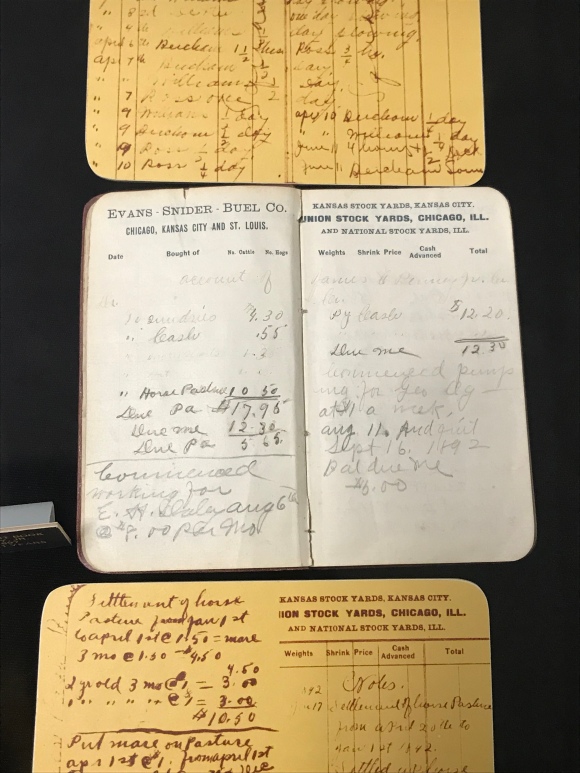 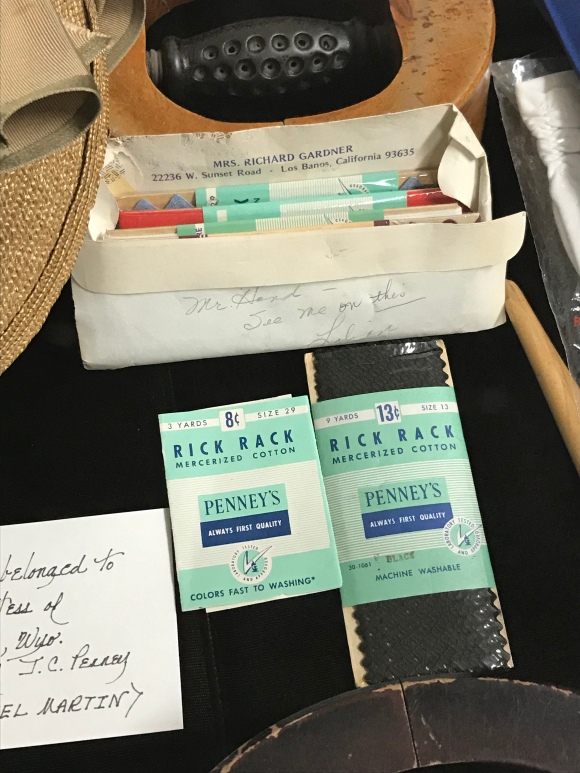 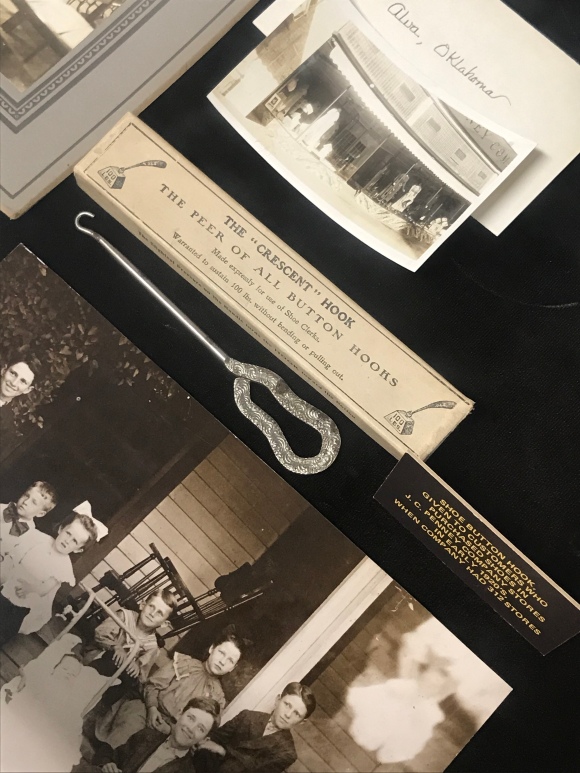 I was especially fond of the old catalogs and the first credit cards! I know it’s better now with saving paper and all, but I really miss looking through catalogs. I always loved looking through them and imagining myself as a grown-up lady. 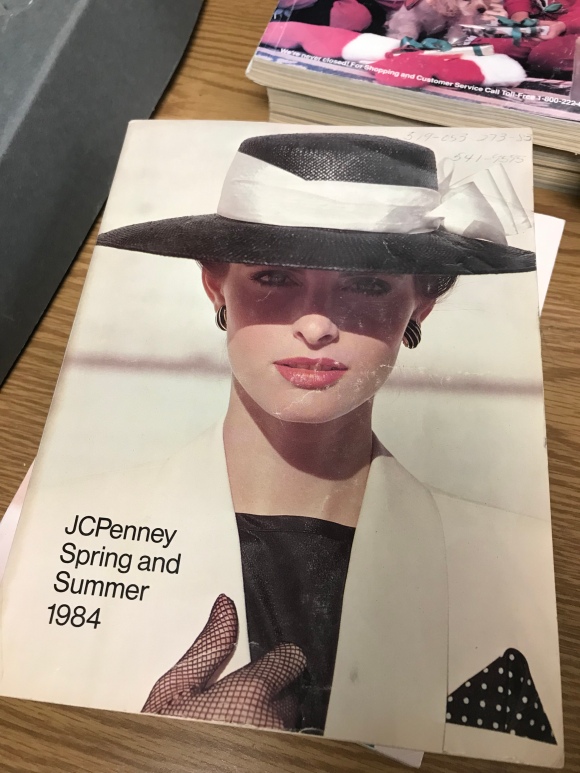 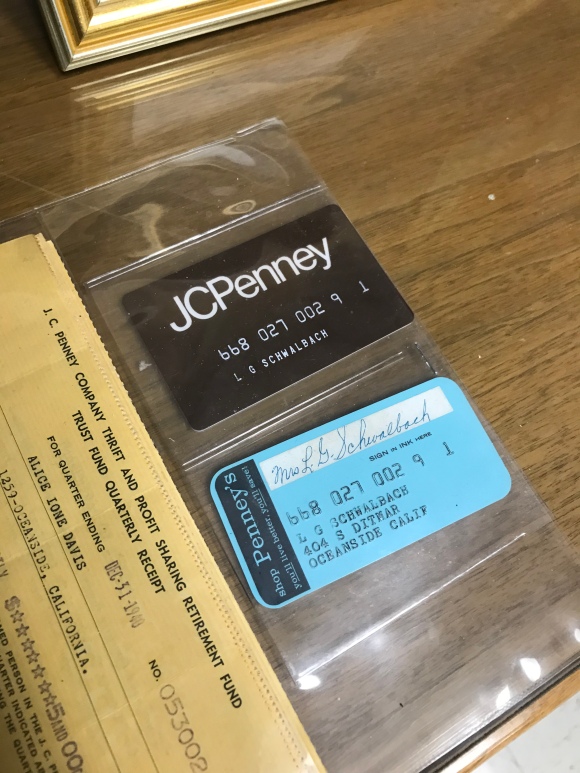 I’m so glad we went back. Postcards (which I shared yesterday) were still ten cents each, making them the best deal in town! 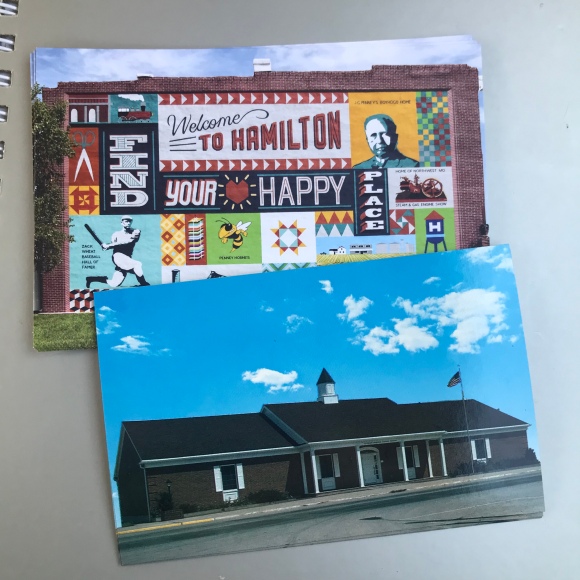 Did you know this week is National Postcard Week? I didn’t until today, but I accidentally got off on the right foot by sending these postcards out from our weekend road trip to Hamilton, Missouri for my grandparents’ memorial service. I failed miserably at sending out thirty things last month for Card and Letter Month, so maybe I can make up for it with a stack of postcards this week! 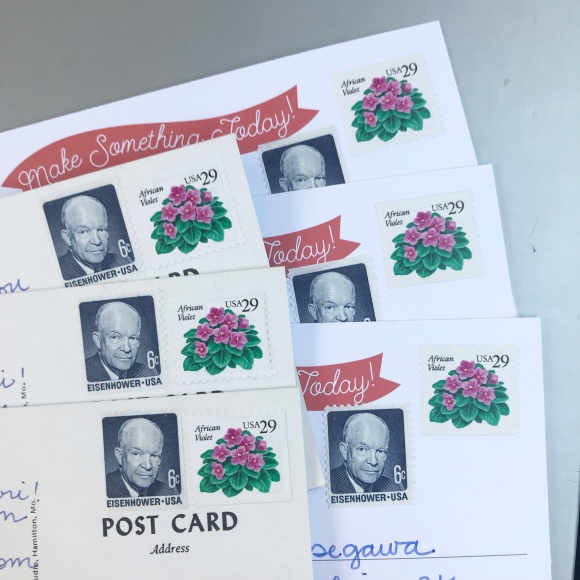 I even took a couple of books of vintage postage with me so I could use some fancy stamps on my postcards. I really loved the old stamps on the old JC Penney Museum postcards. The postcards were still ten cents each, just like they were when I visited almost five years ago!

@fitzgeraldsnightclub on a school night when we had to get up at 4:30 the next morning? Worth it for Rami & the Reliables! #hasegawahappyhour #ramiandthereliables #whyberwyn
Thanks to @su.frost for having us over for a fondue celebration! We enjoyed classic cheese fondue, bagna càuda, and classic chocolate fondue with every dipper option imaginable. 🫕 #fondueparty #bagnacauda #kaftan
Shrimp Paparazzi! #dinnerparty #latergram #🍤
Cancel everything. Lucille Clifton is back in my house. #kimberlyahreads #lucilleclifton #poetry
This guy doesn’t waste any time. He already has Columbo framed and ready to hang. (I still have pictures I’ve had for years that need framed!) #housegawa #columbo
Snow King. ❄️ #hasegawasnowremovalservice
Loading Comments...