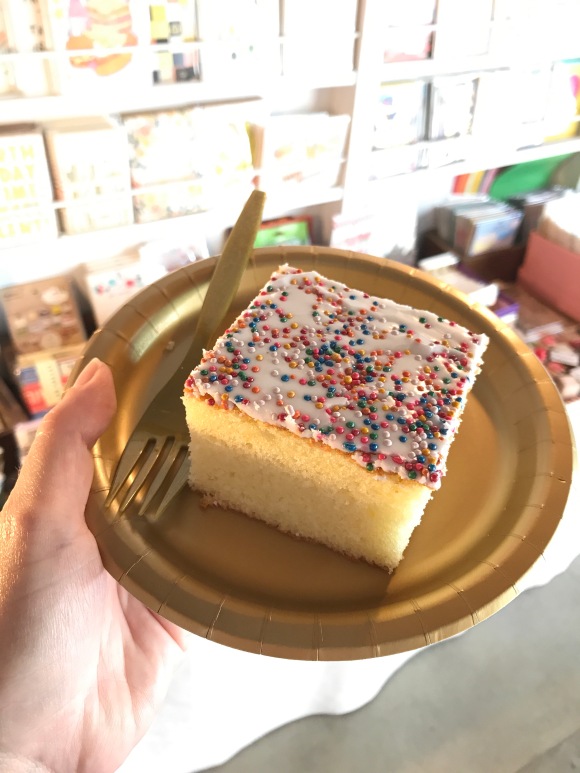 Last month Naoto surprised me with a trip to Los Angeles for the Letter Writers Alliance 10th anniversary party hosted by Margaret from Paper Pastries. Margaret and I have been pen pals for a few years now but we’d only met briefly at Ex Postal Facto. So I was really looking forward to seeing her again and meeting her sweet family. The trip exceeded my expectations. There wasn’t a ton of time for sight seeing (especially since my Friday was cut short thanks to flight delays, womp womp) but I loved the time I spent with Margaret and celebrating ten years of writing with the LWA.

On Friday afternoon, Margaret took me to the top of City Hall for a view of LA. Then we shopped around Little Tokyo. Chicago doesn’t have a Japanese neighborhood so it was such a treat to go to these little shops and restaurants. We haven’t planned our 2017 trip to Japan yet, so I’m feeling a little Japan withdrawal so it was great to immerse myself in the cuteness of Little Tokyo. I bought some stickers and a fuurin, which is a Japanese wind chime. (I’ve been wanting one for Tanabata next month. I’ll show you soon!)

We also had Honeymee which was amazing and is making me rethink my summer treats. It’s a special soft serve that comes topped with a real honeycomb. Seriously, what a combination! It was so good and worth the sticky hands that followed.

I also got to go to Poketo which has been on my list for some time. I only bought some greeting cards but I just love their style. ​

On Saturday morning I went to brunch with Margaret, her husband Tony, and their adorable daughter Ellis. (Sadly no pictures of this…) 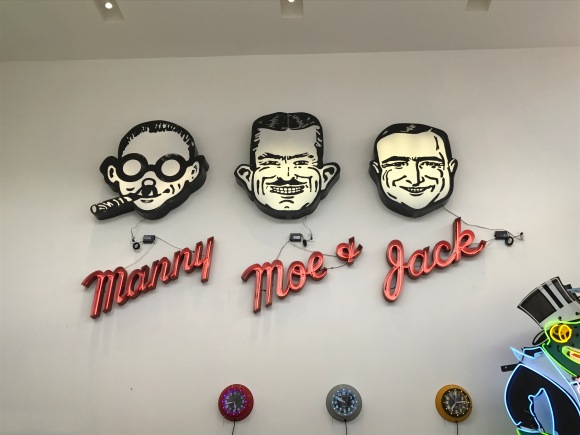 Then I killed time at the Museum of Neon Arts in Glendale. It was the smallest museum ever, but it was packed with neon signs and modern art. I liked the old neon signs the best but I was smitten with the Japanese katakana in the last piece above. (It says “neon” and was made for an art installation in Japan in 1998.) 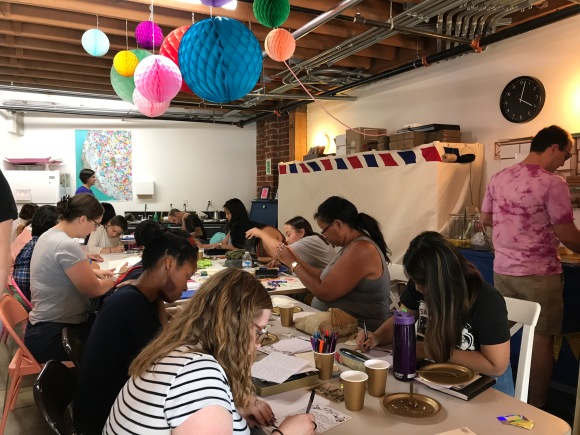 I shopped, I wrote a few postcards, I chatted, I drank champagne punch, and I ate the most delicious cake ever–white cake with white frosting and COVERED in festive sprinkles. It was perfect. It was so amazing to see people come from far and wide to celebrate letter writing! The letter writing community is so diverse and friendly!

After the party we all went out for dumplings and drinks which was the perfect ending for a day with pen pals who’ve become true friends. 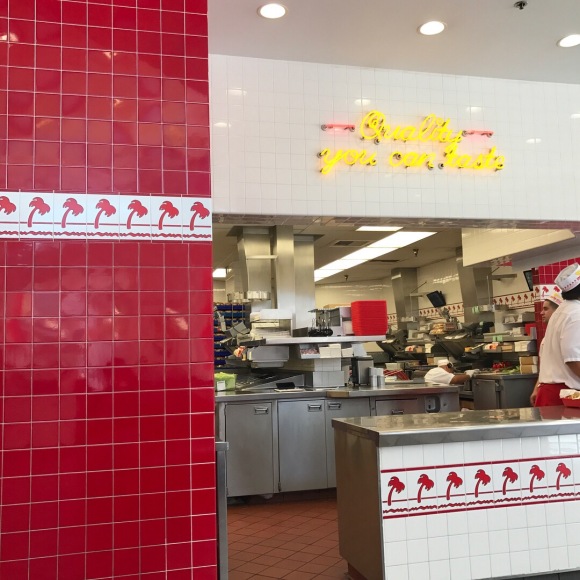 On Sunday my flight left pretty early so I just had time to finish some postcards and eat an In-and-Out burger, my first. (It was good…I didn’t get the fries because it was 10:30AM.) 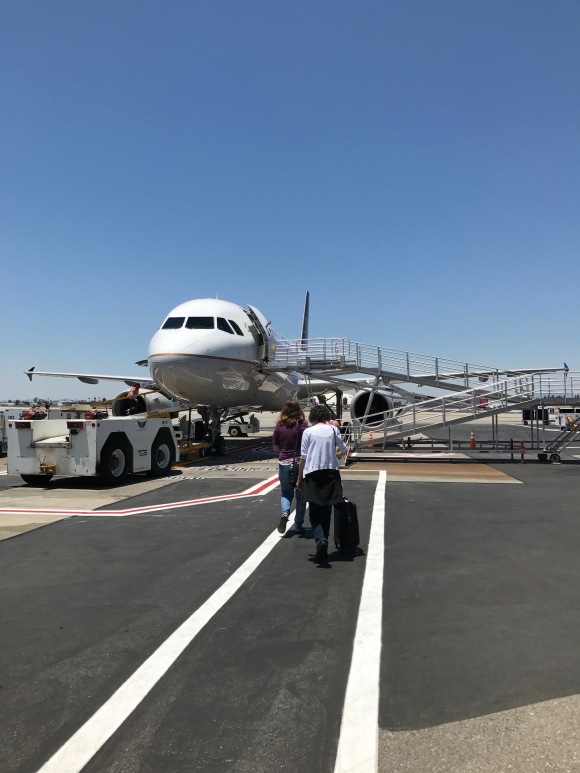 Whew…it was a whirlwind trip. Now I’m home and looking forward to the NEXT LWA party, tomorrow night at Greer! 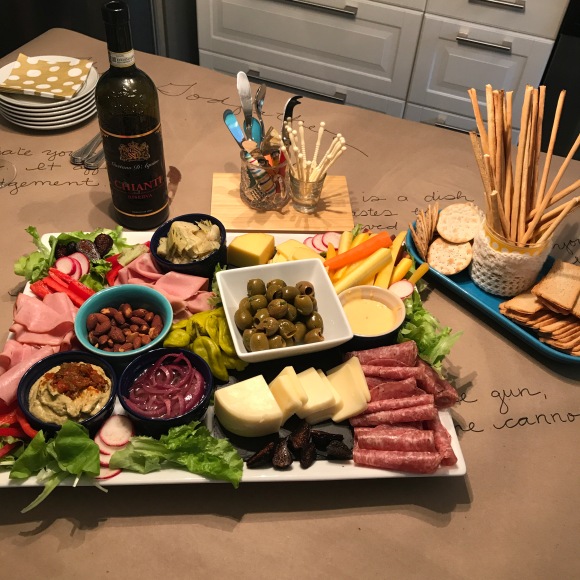 Maybe you know this about me…I haven’t seen many movies. In fact, most movies made in this century, I’ve only seen because I’ve been on plenty of long plane rides. When the Oscars come around, most years I haven’t seen any of the nominees. Recently, Ida (Best Foreign Film) is the only one I can remember seeing. 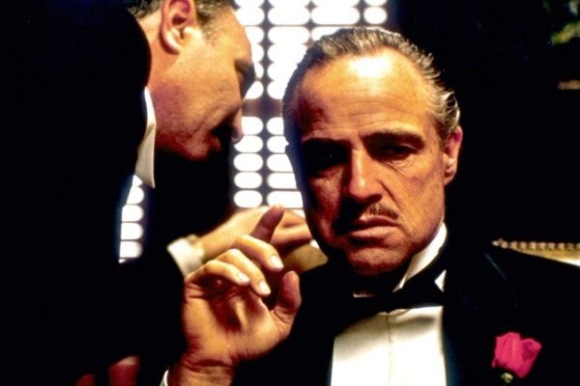 So it should be unsurprising that I’ve never seen The Godfather. The movie turned forty-five this year and TCM brought it back to the big screen on Sunday (and today! Go if you can!) I knew it would be the perfect way to experience this classic for the first time.

I decided to make an event of it and host a Godfather feast after the movie. We drank chianti and enjoyed the fabulous antipasto platter pictured at the top, caprese salad, spaghetti and meatballs, and cannoli while we talked about the movie and how crazy good looking Al Pacino was in the 70s.

I’ve seen quite a few of the Fandango/TCM Big Screen Classics and they are well-done and not widely attended (at least around my neighborhood.) The TCM people do a little introduction and closing with some history of the movie, which is always fascinating and helps put the classic in context. I’m checking out the rest of this year’s line up to see what other parties we can plan–E.T. is coming and I haven’t seen that since the 80s so it will be like seeing it again for the first time!

Have you seen any good movies lately? (Old or new!)

P.S. As usual, not a sponsored post. And pics of The Godfather courtesy of the movie…not my own camera. 🙂 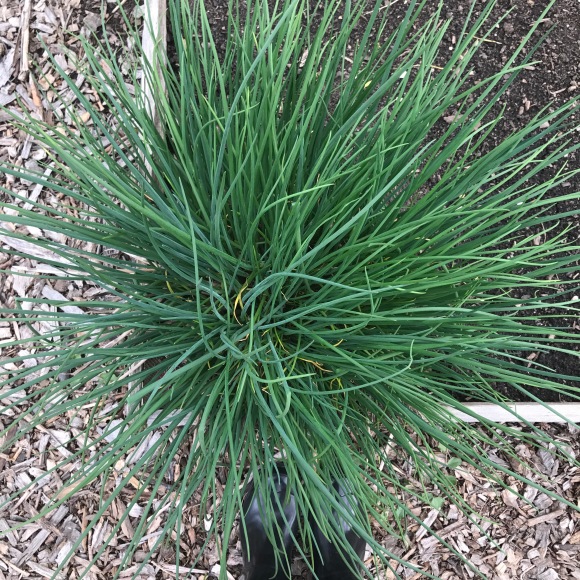 We’re back in the garden again!

I’m a little late in my gardening season posts…a little behind on posting in general. But here’s what is going on in Plot 6 so far this season:

Last year when we closed the garden, a woman who lives in the neighborhood gave a bunch of us garlic from her garden. I’ve never planted garlic before so I was excited to plant a few bulbs and even more delighted to be welcomed this spring with several garlic plants! It’s always fun to come back to something growing instead of just plain dirt, right? And unlike my chive and walking onions, they aren’t taking up too much space…that chive plant gets bigger and bigger every year.

Ugh, and I really like the walking onions because they are tasty and grow into crazy alien-like beasts, but man…they are shading a whole corner of my plot! 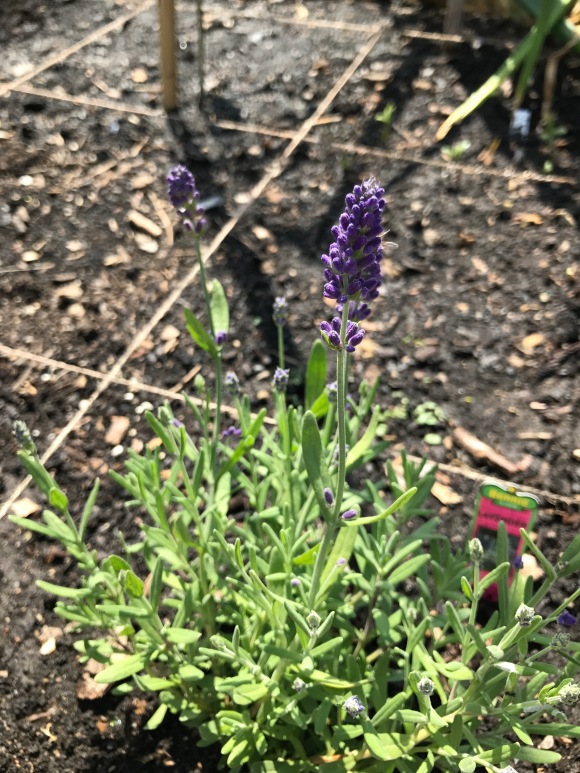 So far we’ve planted a few herbs (lavender and rosemary from seedlings and thyme and basil from seed,) edamame, beets, daikon, kabocha, kale, and four types of tomatoes: Brandywine, Rutgers, Better Boy, and Green Zebra. I have at least two more tomatoes on my wishlist…which just goes to show I haven’t learned from my tomato jungle disasters of the past. #YOLO 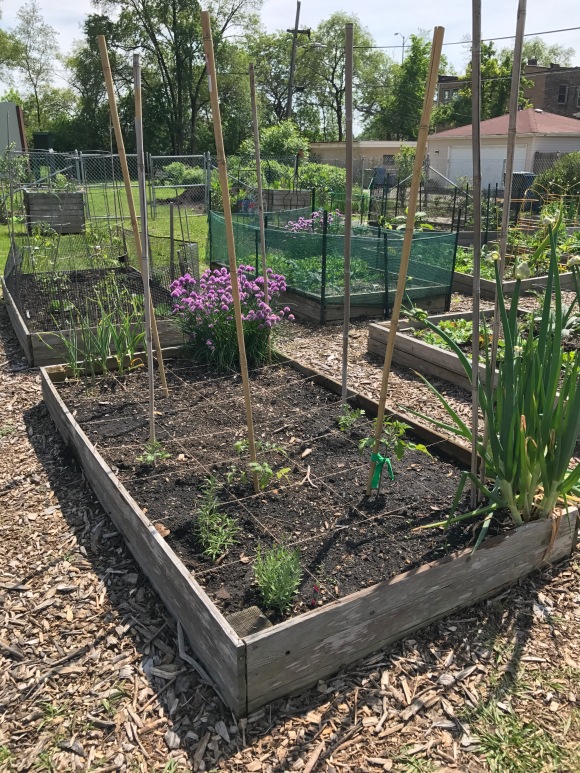 Here’s the plot so far. It’s in its neat and tidy stage before things start growing out of control and the rabbits eat the tops of my edamame again. The joys of gardening!

Today is our 11th anniversary. I was looking through our wedding album to find another picture to share with you (I feel like I have shared so many over the years!) and this one made me smile. Our first dance was “Somewhere Over the Rainbow” by Israel “IZ” Kamakawiwo’ole. Naoto made me laugh the whole time. Eleven years later, he’s still making me laugh.

One more from German Fest because my friends are 🥰🥰🥰 #germanfest #exploreforestpark #prost
Our first German Fest! #germanfest #exploreforestpark #lederhosen #forestparkhistory
The Western Elstons! Music and Cocktails by Isaac™️ are soothing my weary soul tonight. #whyberwyn
Summer fun with @forestparkreads who hosted @konaice_ah for a cool treat on this hot day. I felt like I was in Hawaii! 🍧
What a fun #pride🌈 celebration, Forest Park!
She’s judging me for sitting here when I should be cleaning, but also she’s preventing me from getting up. #pahifc #judgmentalpresley
Loading Comments...