The Quilt from Grandpa & Sharon’s House

I’m finally sharing the quilt that my mom picked for me at Grandpa and Sharon’s house when we were there last spring for the memorial service. I dont’t know the history of the quilt or who made it, but it’s created with various fabrics that look like they would have been clothes or recycled from other things. It’s a mix of florals, a weird mountain scene, some children’s fabric, and stripes. Nothing really matches or goes together, which is part of the charm.

When we got home with it, I washed it and held my breath the whole time. (You’re apparently not supposed to wash old quilts…who knew?) I used the delicate setting and let it air dry and came out fine. I figured I can’t have a blanket in the house that I’m not washing and I’d rather use this quilt than just store it in the closet. Since then, Presley barfed on the quilt and I had to wash it again, so I guess it’s just going to be a part of our lives…which is kind of the point, right?

Last weekend was our annual book club Christmas tea and it was delightful, as usual. We had four kinds of sandwiches (egg salad, shrimp salad, roast beef with provolone, and cilantro chicken salad,) two kinds of scones (cranberry-orange and bacon cheddar,) Christmas cake, grape salad, and Christmas punch. I love a good tea sandwich so I ate way too many and also floated away from all the tea. 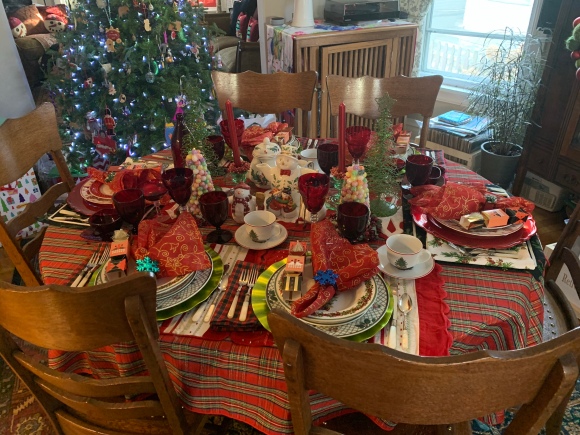 Stasia brought corsages for everyone so it felt especially fancy. I think corsages are under-utilized and I’m going to demand one for every birthday from now on.

We read PG Wodehouse which was enjoyable, but I read it all in a couple days so I was sort of Wodehoused out by the end. The writing is really charming though so hopefully I’ll be ready to tackle a short story here and there in the future. 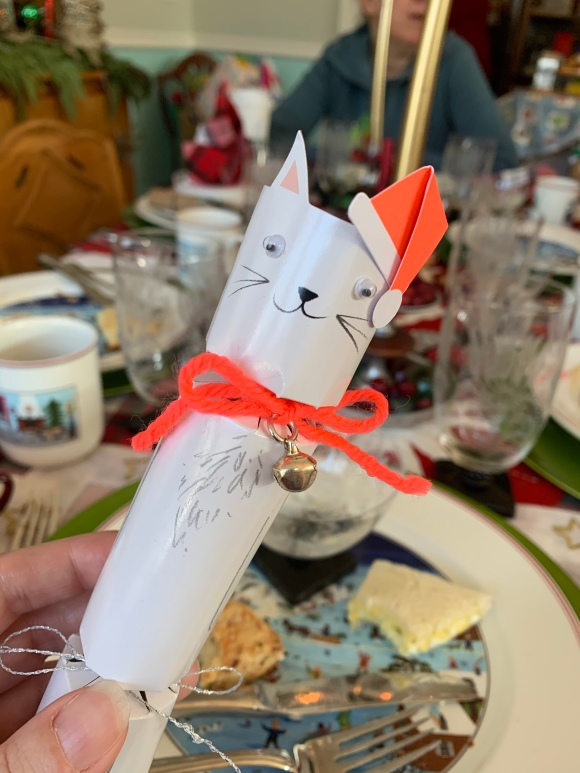 We always have party poppers with crowns, mustaches, and jokes. Reading the jokes and guessing the riddles is always my favorite part of the day. 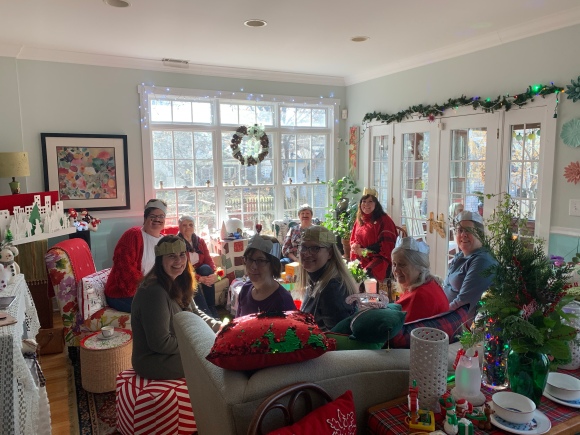 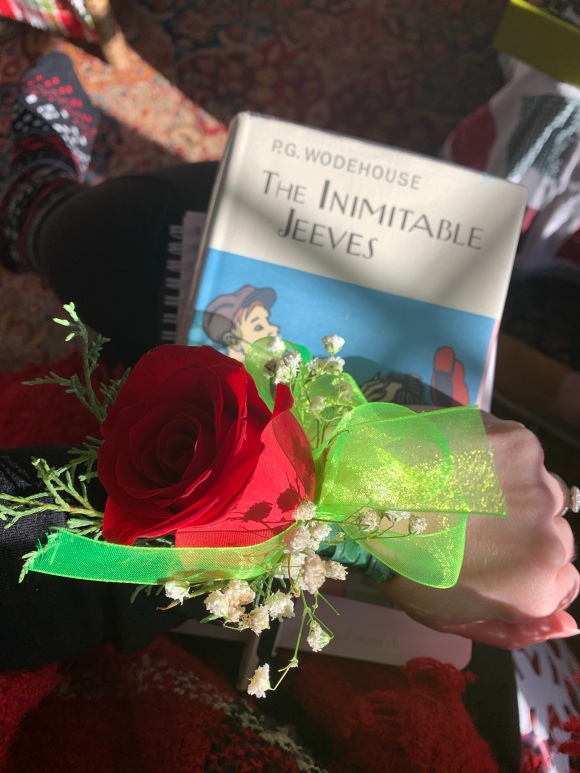 It was a very good Christmas. As usual, I feel very spoiled by Naoto’s generosity. He gave me this very fun Ruth Bader Ginsburg gift set that includes cards, a notepad, a pin, a bottle opener, a sticker, a tattoo, and a hilarious gavel pencil.

He also went to Greer and found another RBG notepad and he also picked out a cat notebook and the special Greer x Appointed blue notebook. It’s such a perfect shade of blue and I love Appointed notebooks…the paper is a dream to write on. And he picked out this sweet Traveler’s Notebook charm from Baum-Kuchen.

We’ve done a few craft shows with Jessica Pignotti and I just love her style. He picked out this sweet carrot necklace and this Presley-like cat pin for me. Seriously, those tiny carrot stitches are so delicate and perfect. I can’t wait to wear them both.

And finally, he stuffed my stocking with some treats he picked up while he was in Oregon in the fall.

Nothing I gave Naoto comes close to what he gave me, but I do think these Dunkin Donuts sweatpants are pretty sweet, right?

Merry Christmas (if you celebrate) and happy holidays! I’ll be back later this week with a Christmas update. Until then, I hope you’re enjoying the holiday season! ❤️💚

The Christmas Rush is Here 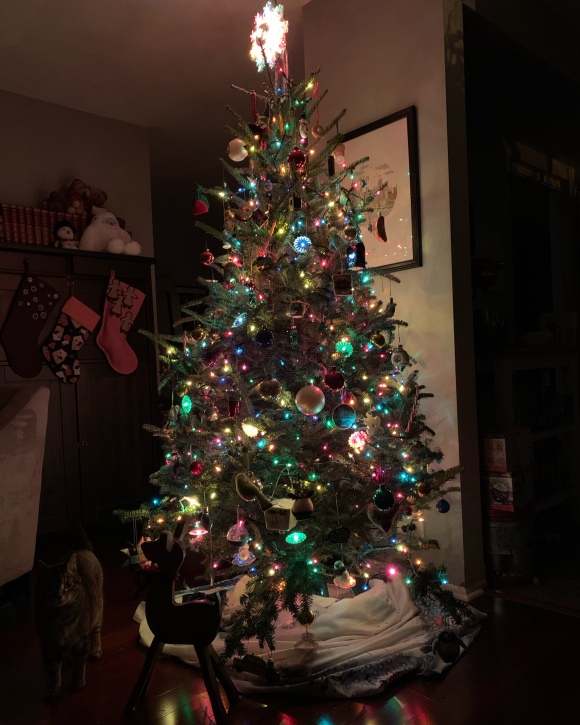 This was the scene on Monday morning when I got up early to take Naoto to work and had a couple of hours to sit in the dark and gaze at the Christmas tree while listening to NPR. We had our last craft show of the season last weekend and Mondayc just felt good to have nothing to do for a moment before work. Not that I really have nothing to do–there’s plenty of shopping, shopping, wrapping, card writing, and more shopping to do. But it was nice to take a few moments and appreciate the tree and the lights and Presley’s purrs. Hopefully by the time this posts, my Christmas cards will be done and my book club book will be read and at least a few of the gifts have been wrapped or at least purchased…one can hope.

How are your holiday preparations coming?

I’ve been wanting a Christmas village post office for awhile now. I have my Putz house village, and I’ve never seen a vintage paper post office before, so I told my mom and dad to keep an eye out for some vintage or new ceramic ones. Well, they found this perfect little jewel at a thrift shop for $2.50! They found the postman Santa last year. He might not be to scale but he fits right in!

I don’t know how vintage it is, but I think it’s charming and now I want a little collection of just random post offices (serendipitously found at thrift stores because I don’t need to stalk something else on eBay!) My mini post office collection of one is living on my desk so it stays safe from Presley. (She has taken to knocking things down at 4AM to get our attention.)

Tomorrow, I need to go to the actual, non-ceramic post office to buy some stamps for the church and to mail something…wish me luck!

November was a weird reading month, with Halloween and Christmas book-ending a Midwestern coming-of-age story.

I love “The Yellow Wallpaper” so I was excited to read this one, which is sort of a ghost story inside a feminist story. I can’t say more without major spoilers, but there is an unwed mother and a haunted wisteria involved…

One of our friends was going to see a movie based on this book and when he told me about it, I ordered it from the library and put down The Sundial to make time for vampires. Carmilla predates Dracula by a quarter of a century and is one of the first novels published with lesbian love scenes. It’s provocative and really good! Put it on your list for next Halloween!

The Girl of the Limberlost by Gene Stratton Porter

This was our book club read, chosen because it was referenced in Not Without Laughter last month. It reminded me a lot of Anne of Green Gables (which to me, is the gold standard of old coming of age books.) Maybe that’s why I didn’t love this…the main character was too perfect. Anne is so lovable because she is flawed and has some very relateable embarrassing moments. Elnora is so perfect that she’s kind of boring, even though her adventures in the limberlost were interesting to read about. (I had no idea there used to be a lot of swampland in Indiana!) Oh and there’s a love triangle that reminds me of a Hallmark movie, which just does not work in the same way as it does on the Hallmark channel.

Christmas Day in the Morning by Pearl S. Buck

This is a sweet Christmas short story. It’s a super quick read and it warms the heart more than a hot cup of cider.

This one is so weird, and I loved it. Santa gets kidnapped by some cave daemons and his virtues are tested. It’s a simple moral story but I really enjoyed it, especially the illustrations by Richard Rosenblum. I’ve never read The Wizard of Oz and now I kind of want to…

That’s all for November. So far, I haven’t read anything this month, even though I have a book of Christmas murder mysteries and our book club book to read…I’m two books away from finishing fifty books/stories this year, so I better get a move on so I can meet my goal! 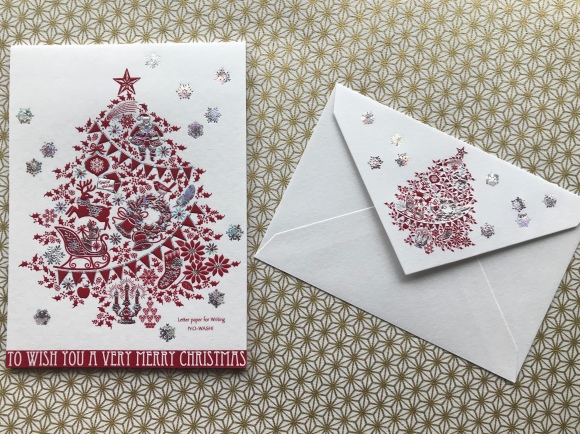 I found this Christmas stationery last year at Loft and it was pretty pricey…like way more than I usually spend for stationery in Japan which has so many things for cheap. But Naoto slipped it into my basket and told me to buy it…it’s hard to argue with him in Japan. 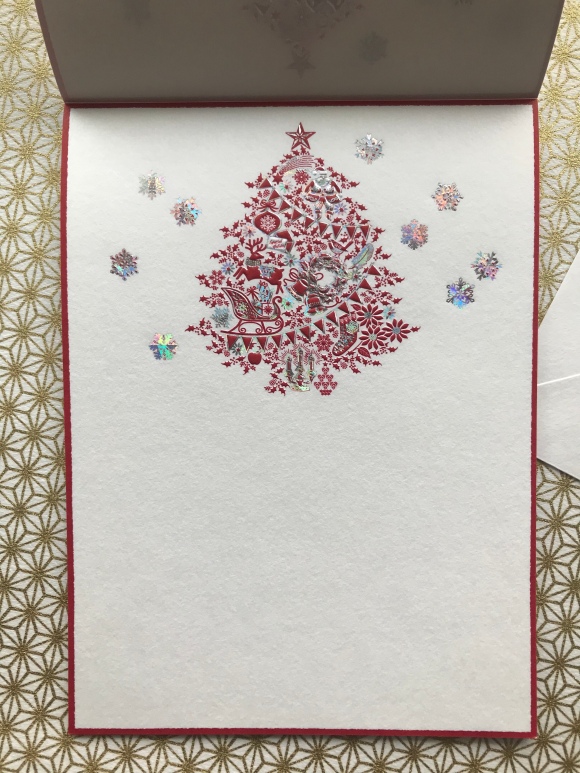 It’s really lovely washi paper with a nice texture that makes me wish I used a fountain pen more. And the tree is embossed with red and iridescent ink. I hope I can make time to send out a Christmas letter or two this season!

Have you started your Christmas (or other holiday) cards yet? I haven’t…hopefully next week after my last show of the season I can make time for some mail and other holiday cheer!

Our Christmas tree has been up for a week and I think it’s looking fine. I dialed back on some of the decorations this year–we’ll call this a minimalist Christmas–but I made sure to include all of my favorites. I think this year’s tree is a little skinnier than year’s past, but it’s full of charm and it’s perfect.

It was the first time Naoto picked out a tree by himself. Usually I go with him, but I wanted to get the Christmas stuff out and start decorating since Christmas is coming faster than a flying reindeer this year. I told him to make sure the tree was straight, didn’t have any big holes, and didn’t have any dry brown needles. He picked a winner! And, as you can tell from the video, it was so fun to be surprised with his pick.

How is your holiday coming along?

This is it…the final Plot 6 post of the decade…

Our plot went out with a whimper this year…what is it about September that makes me lose interest in gardening? Well, this year, I think it was because we had kind of a mediocre tomato harvest (and you know I’m really just all about the tomatoes.) Plus, job searching and starting took up a lot of my free time. Anyway…we let the garden die…

…but not before we harvested a nice little batch of teeny carrots. These guys made it through several freezes and the first couple of snows, so I was just glad to have something to pick! The carrots are designed to be sort of stumpy, but I think maybe these are small for even the stumpy size. They’re pretty tasty though! I planted them among the tomatoes and then never thinned them as directed, so that could explain things.

Here’s our plot all put to bed for the season. See you next spring, buddy!

Lo Pan and I aren’t BFFs yet, but he did let me pet him so that’s a win in my book.
You know it’s a good party when @instanaoto falls asleep in the hammock. #sangriashowdown
Always fun to see @scottligon & friends, especially SHARON!! #OAKtoberfest #fridayiminlove
Friday hugs before my OAktoberfest outing with @instanaoto. #pahifc #preselyhugs #fridayiminlove
Determined. #pahifc
I went upstairs for 5 minutes to change clothes. Presley was napping up there but she got up, went downstairs, and found my (mostly empty) yogurt container on the side table and proceeded to make it her own. #pahifc
Loading Comments...